In this episode, the crew gets together to discuss being out of “skate shape,” the new United Skates Documentary film,  their trip to Detriot, and much more.

Does skate parties’ meet and greet lose its luster over time? What pulls a skater to invest their time and money on a skate party they’ve never attended? In this episode, IMSN explores these questions and take about learning from Travis’ major travel mistake and other hilarious stories!

It’s My Skate Night’s Free99 skate jam! Too much sauce! Thanks to all that came out and Shake & Bake Family Fun Center for sponsoring this event.Support your local roller skating rinks!

In this episode, IMSN discusses how they feel about the state of skating as it relates to fitting in their personal lives, “skate accountability partners,” Lawerence and Travis’ skate confessions, Travis’s ultimate clap-back at Glen, and more.

It’s My Skate Night has had a great year! We shared a lot of memorable moments with our supporters throughout 2015 and we thank you for riding along! Here’s a brief recap of a few of IMSN’s top moments of  2015.

IMSN and the Baltimore Uprising

One of the most serious events that made national news coverage in 2015 was the Baltimore Uprising following Freddie Gray’s death. This happened in our home town, blocks away from our home rink. During the aftermath,  it was a proud moment to see the  Baltimore skate community come together at ground zero to lift the spirits of our city in a great impromptu community building event.

As you may know, after the height of the the civil unrest in #Baltimore, the Bmore skate fam got together to demonstrate peacefully in our skates at ground zero. This is a mash-up video tribute of my personal experience of that. The positive energy was flowing. It was truly a great sight. Love.#IMSN #itsmyskatenight #HealBaltimore #OneBaltimore #AmericanOxygen #RihannaDontSueMe

Even though we didn’t set out to get publicity we’ve been featured in the Baltimore Sun Paper and on Vice Sports (Click to read full article).

IMSN helped Jubilee Arts  celebrate the local professional and teen artist as they unveil the Sandtown mural project. Complete with trolley tours, music, performances, and food this event was one for the books.

Such great work happening in the community! (Click here to see more).

2015 marked the 2nd year we performed at Artscape – the nation’s largest free arts festival. The temperatures reached well into the 90s and yet the skaters kept rolling to the live music provided by DJ JB. Kudos to all that came out and skated in oppressively humid tropical rain forest like conditions!

Directly after Artscape we put on a free Skate Jam and showcase for the community sponsored by The Contemporary. Thanks Harm City Roller Derby team for coming out and showing your support! 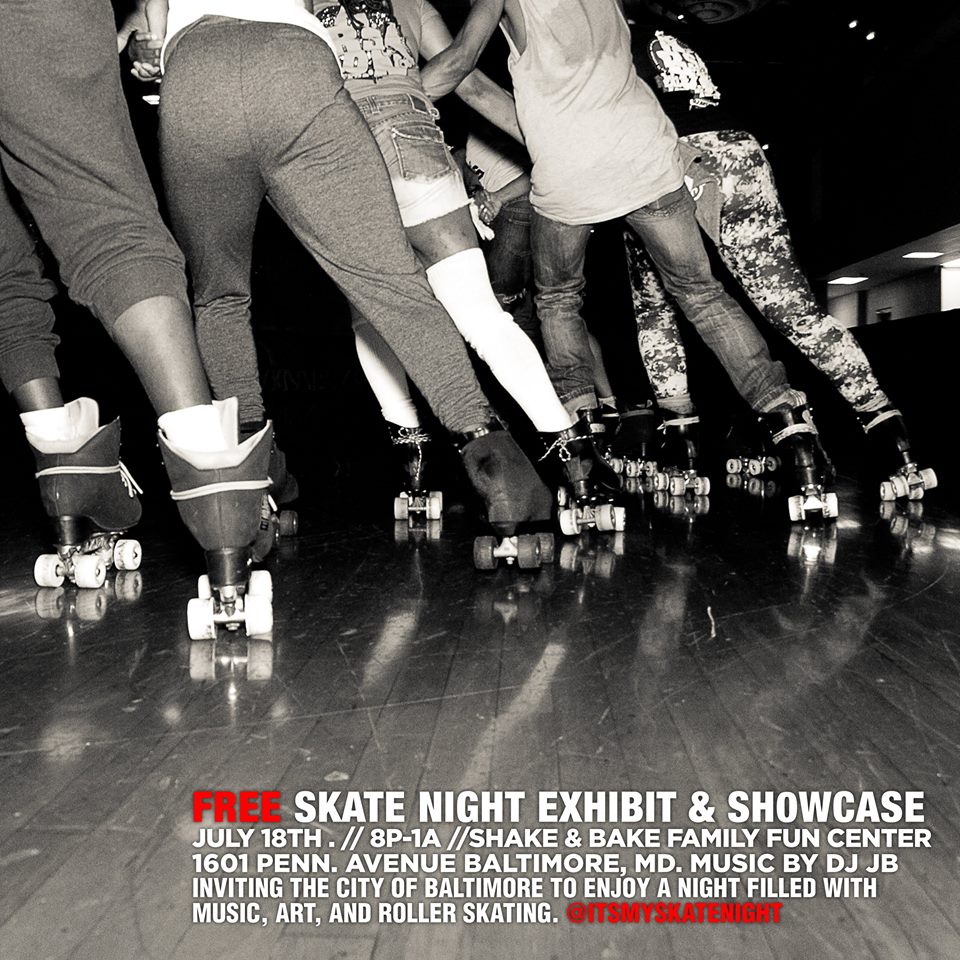 Inspired by Chicks in Bowls and stupidity, the It’s My Skate Night crew tackled the skate park in Hampden Baltimore with near disastrous results. We vow not to do it again unless the Chicks in Bowls accompany us to show us the ropes (yes, we’re calling you gals out ;-).

New Home for the IMSN Baby

After a two years of taking (marginally) good care of our “mascot” we found a new home for the IMSN baby doll. She’s in better hands now. Please send photos. We’d love to see her in her new home.  CLICK HERE to listen to our Podcast to get the full back-story.

She was serious about buying the skate baby mascot. We had here for 2 years. But it was time to go to a house of love. #imsn What should be oh new mascot? Thoughts? suggestions? #RITC

This also marked our second year we participated in DJ Jammin’s fashion show. Lots of fun!

We traveled the country to see our supporters and met countless new skaters during our travels to over 8 states this year. Maybe next year we will finally fulfill our dream of going international!

We Launched Our Podcast!

We’ve been talking about this for a while and finally took it to the airwaves! So many topics to cover! We’re excite to see what we come up with next! Thank you all for your feed back and “5 star” reviews on iTunes!
Welp here’s to a brand spankin’ new year.
Happy New Years skate fam!!!
Cheers!

It’s a new year and a very new podcast episode! It’s My Skate Night discuss the up’s and downs of 2015 and much more.

This episode we discuss the difference between a skate crews vs skate clubs/groups, what does It’s My Skate Night consider itself?, the skate culture, IMSN’s list of dos and don’ts, calling out our worst rinks and experiences, DJ drops, and a secret unboxing at the end of the episode.

Welcome to the It’s My Skate Night podcast episode 2 where we get into the topics of road trips, Travis’s DJ drop fail, cold blooded skaters, and a lot more. Feature the 4th wonder Jamison live from New Jersey.

It’s My Skate Night’s first official podcast. Here we discuss how we all got into roller skating, our skate set-up, backpackin’, confessions, and a host of other things. Hilarity ensues.

Back to Cali was nice from the stand point for a newbie. I’ve never been to this event nor the rink. The host rink was at Fountain Valley right outside of Long Beach, CA. Fountain Valley floor was surprisingly nice considering that the wood floor is painted blue. The rink was very well maintained and clean.

Thursday night was packed – it was nice to see others from all over, especially the Midwest (they really came out to support). The greeting at the door was blah and the overall direction upon entering the rink was also blah (once I paid no one said anything to me, I feel that they recognized only the people that they knew personally, which is kinda discouraging to a newbie like me…).  You really never notice the important roll of door greeting until it’s missing. There was a man selling tickets but, he looked scary, Lol. We’ll just call him “Hustle Man.” Every jam has to have a Hustle Man. Any way I got my tickets the next day from DJ “Big Bert.” Bert was very visible and friendly! The music was on point. The DJs catered to ALL – from East to West. Again, it was on point! I heard no complaints of the music; the vibe was right!

What’s BTC without the  “All White Party?” Very well put together I must say.  Everyone was freshly dressed in their white hook ups! The venue was at the Marina which had two stories, with two DJs. “Ballin’!” The crowd danced all night. It was Great! Truly a staple of this event.
Saturday was the picnic…  although I didn’t make it I heard nothing but good things about it.  Can’t go wrong with a cocktail of great weather, free food, and music to vibe to.
Forward to  Saturday Night – even though the rink was completely PACKED(!!!) – the sweat was visible and yet the roll was still very enjoyable! No styles were called… No states were called… just Cali rolling and some serious circle work. I was in ear shot of someone from out-of-town expressing how they truly enjoyed the way Cali rolled!! They were pleased that they did not have to do their signature “bark” to get people out of there way! Other honorable mentions includes slow walkers, Gsliders and striders!

There was a fight in the rink barely worth mentioning… a rarity. But, fortunately I brought my fresh mint tea to sip, so that was none of my business, LOL.

The focus was that the music “Rocked” the rink and everyone appeared to be having a Wonderful time. All Smiles!!

Although, the sideline vibe was a bit different and lacked the hospitality or welcome-ness that I was used to from other skate parties. But hey! This is Cali where the Gangstas Roll!!!
Leaving the rink Saturday Night myself and most other skaters had  a difficult question to answer,  “Where to Skate on Sunday!?” Apparently there’s a popular local session in Chino and competing by default with the Back 2 Cali session. Many people were trying to decide where to go skate? Some people decided that they were going to attend both rinks (the ambitious ones). Some people decided to attend one rink over the other for many reasons; clearly there was a divided. Hopefully, by next year the out-of-towners do not have to decide on which rink to roll at because it really made a difference. Not Good.
So in all here are my Pros:
The Music was Great
Great Rink
White Party was Hype!
The Weather was perfect
And, of course, it’s CALI!!!
Cons:
Hospitality could be improved
The Split Rinks on Sunday
There was not an itinerary for suggestions on sightseeing places for people that like to venture…
The Hotel charged $17 a night for parking (Valet $20) Not a BTC issue. But  sheez.
Overall this newbies thought is… I’ve came and I experienced Back to Cali! “I’m Going Going Back Back to CALI!!!”
–  Angela (Midwest IMSN Correspondent)

Thowback Back to Cali Video:

I would but… its my skate night.