I arrived at the Houston hobby at 7:30 pm local time and went directly to the host which is about 5 minutes from the airport. The hotel provided a shuttle which I appreciated, as I did not rent a car on this trip. After checking in I went over to the Meet and Greet (which I think need a new name, but that’s a convo for a different time). It was at a bar next door. Honestly, I didn’t even go inside – I got there so late it was pretty much at capacity. Skaters spilled over in to the parking lot just chopping it up. The weather was great, no complaints there. Definitely wasn’t missing the snow storm back home. Left the Meet and Greet and “broke bread” with the skate fam. before a quick nap – had to get my mind and body “rink ready.”

The Friday night set at Fun City Rink, 12am – 5am with DJ Joe Bowen didn’t disappoint. I felt like he did a great job playing to the crowd and touching on the different styles. He even played some new and old school local flavors. He could have played that “H-Town-knocking the boots” twice and no one could have been mad at that. It was Neon NIGHT, so the lights were low all night and the skaters shined bright under the black light.

[Check out our Instagram page to see the few clips I managed to get in the low light.]

The rink was small with deep corners. The wood felt great, only one bump patch off second turn, no biggie. Seating around the rink was plentiful – decor was on point. The large skaters’ mural on the long wall stretch was a nice touch to the rink. 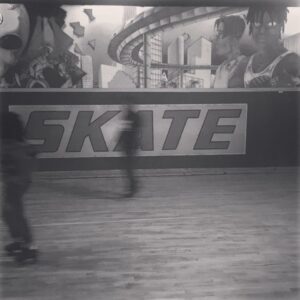 I skated the entire night – no real reason to get off the floor, until the music stopped. Good size crowd for a Friday night. 15-20 min ride to the hotel for some R and R.

Day two, Saturday. I’m up and out early to set up a vending table at the indoor BBQ/concert. The venue was switched, due to the predicted rain storms which, came true (good call). I didn’t see any of the concert since I was on vending duty outside under the tents. It would have be nice to have the backup of the IMSN crew to relief me of duty to check it out… apparently “extreme yoga class” and “full body waxing” was more important. Again, a convo for another time.

The bull riding was cliché for Texas but it fit in well and was entertaining.

I only had the fish fry, but the food was plentiful even though it was served late (kind of a stickler for timing especially when hungry). The Roundup committee was VERY hospitable. I had a small headache and one of the team members offer to walk across the street to a gas station to get me Advil. I tell you folks it’s the small things. I wish I knew her name. I eventually packed up and met up some skate fam. to break bread at the Texas famous Pappadeux (sp). The food was terrific! Good convo. So worth it. Stopped at DQ for some dessert and back to the hotel to chill before skating.

Saturday night 12-5a with DJ Big Bob and DJ Joe Bowen. I didn’t skate the night away because I left 1 skate in the hotel. Smh. I cried a little inside at the thought of considering wearing rentals, but someone was able to pick-up my other skate. #lifesaver #therealmvp. The crowd was thick but bearable. There was no roll-call or style-call which actually worked really well. More events should consider that in my opinion. Not all, just some. The roll call has its place.

All-in-all Houston is a good look for the skate community. Props to the producers of the event. If I could’ve done it differently I would have stayed longer to check out more local flavor. I hate 2 day trips. I was there less than 48 hrs. …but that’s the skate life.

Till next time folks.

I would but… its my skate night.